If you haven’t been to Disney’s Animal Kingdom at Disney World within the past few years, then you may not know about the ride, Expedition Everest. Check out Disney’s description of the ride: “Take on the treacherous terrain of the towering Forbidden Mountain in this high-altitude, high-speed train adventure. Nail-biting hairpin turns hurl you forward toward the peak and then, just when you think it couldn’t get more thrilling – backward! The mountain’s full of surprises: Beware the snarling beast who watches over his domain… the Yeti!”

In my opinion, it is the second best ride at Disney, with only The Rock N Roller Coaster surpassing it. I love it. But I really don’t care for Animal Kingdom at all. My typical routine is to head to DAK first thing in the morning, ride Everest a few times, and head to another park for the remainder of the day. This year, Thanksgiving with the Sadler’s was no exception. The previous day, I described to William and Frances what Erin and I call “The Sleeper”. We have perfected “The Sleeper” since its inauguration back in 2005. The premise behind this mysteriously humorous act is this: while on a high-speed attraction, we act as if we are asleep when the ride automatically takes our picture. This creates what we believe to be a very entertaining photo. Especially when everyone else in the photo is screaming at the top of their lungs and looking terrified.

Here is a blurry example from The Rock N Roller Coaster at Disney Studios, featuring some friends from college. Everyone but Bryan in the front left is “sleeping”. 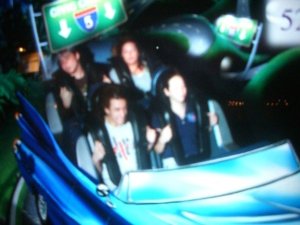 So we practiced “The Sleeper” as we waited in the hour-long line, and Frances and William did a decent job, I must say. We conquered Everest twice on Black Friday. The second time we were in the Single Riders line, so I was sitting beside a random woman, and her daughter and husband were in front of me. This time, I had my head rested on my hand and was “sleeping” while they were all screaming. Unfortunately, we did not get a photo of it.

But we did take a few photos on our way to Mount Everest, before summiting. Apparently I’m supposed to be The Yeti in this photo, terrifying the villagers. :) 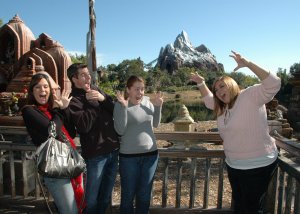 One thought on “The Sleeper & The Yeti”